What Is Deno Deploy and How It Makes Distributed Apps Easily

Deno Deploy is one of the many serverless JavaScript computing platforms that lets developers deploy code without having to manage a server. It's a high-performance distributed system that runs JavaScript, TypeScript, and WebAssembly at scale.

In this article, you'll learn all about Deno Deploy and how it allows developers to quickly script distributed web apps. You'll also learn how to deploy JavaScript and TypeScript using the Deno Playground and the Deno CLI.

Why You Need Deno Deploy

Deno Deploy supports the common features of a serverless JavaScript computing platform, including developing your code locally while deploying it globally, having WebSocket support, having no vendor lock-in, and operating as an online IDE for small projects.

What makes Deno Deploy unique is that instead of using Node.js as a JavaScript runtime, it uses Deno. Deno is a runtime for JavaScript similar to Node.js; however, it improves upon some insufficiencies found in Node.js. It leverages these improvements to make it an attractive serverless computing platform:

For instance, the minimal size of Deno's core API makes Deno Deploy fast in terms of the time it takes to deploy updates. Moreover, it reduces the memory footprint of the applications, which means that Deno Deploy needs fewer resources to run. As a consequence, it's less expensive than services built on top of Node.js.

In Node.js, third-party libraries are managed via the npm CLI and its package.json and package-lock.json files (or something similar if you use YARN instead of the npm CLI). In Deno, third-party libraries are imported as modules using a URL inside the source code. This makes it possible to write a full Deno Deploy web application in a single file.

Supporting TypeScript and JSX (for server-side rendering) in Node.js requires a compilation step, but Deno natively supports them. This means that deploying a script on Deno Deploy is faster since it doesn't require an extra compilation step.

Now that you know all the benefits of using Deno Deploy, test it out by creating a small application using the Deno Playground. The playground lets you create, author, and deploy your application without leaving your web browser. 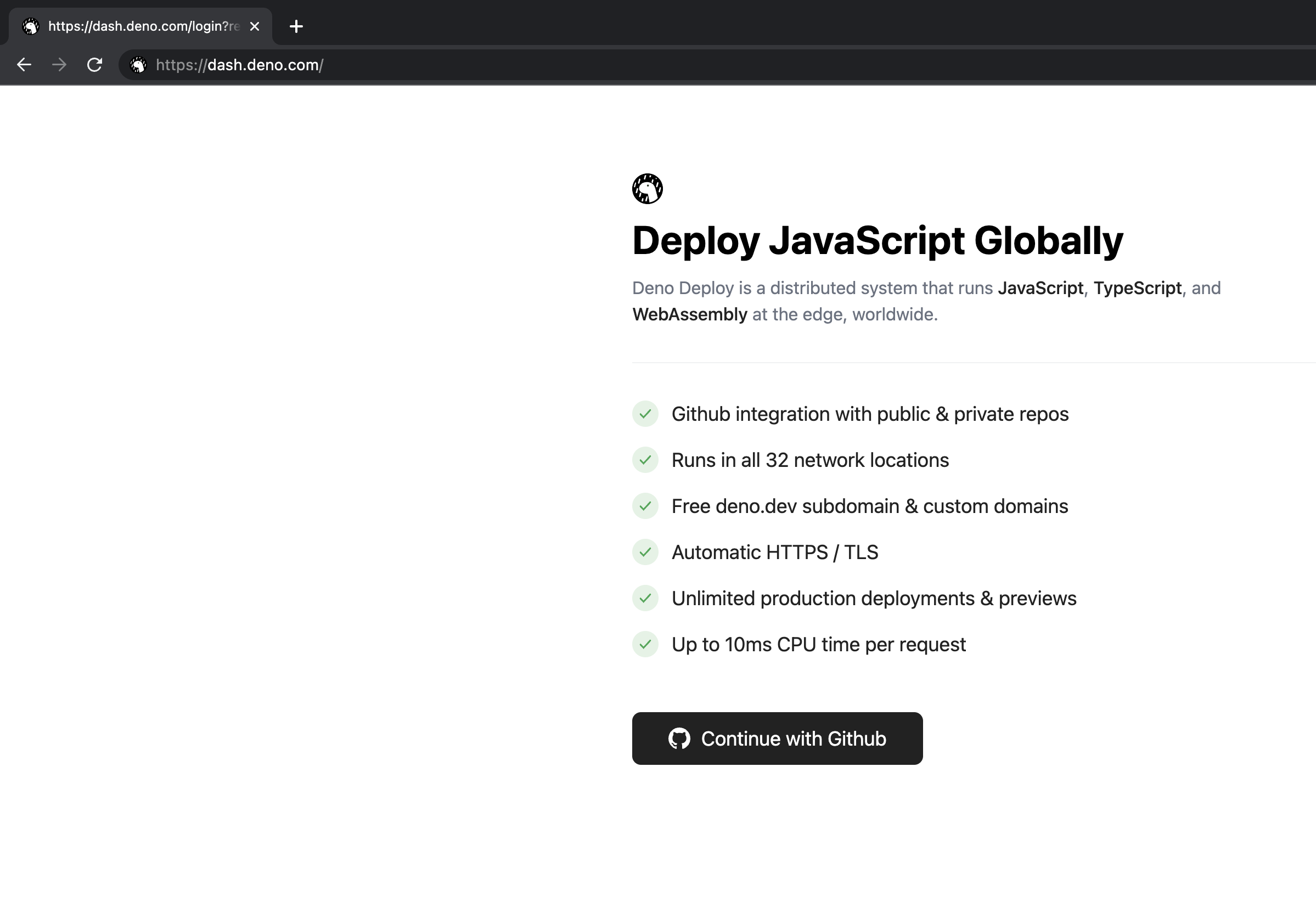 Then create a project by clicking on New Project on the right, which opens the New Project page: 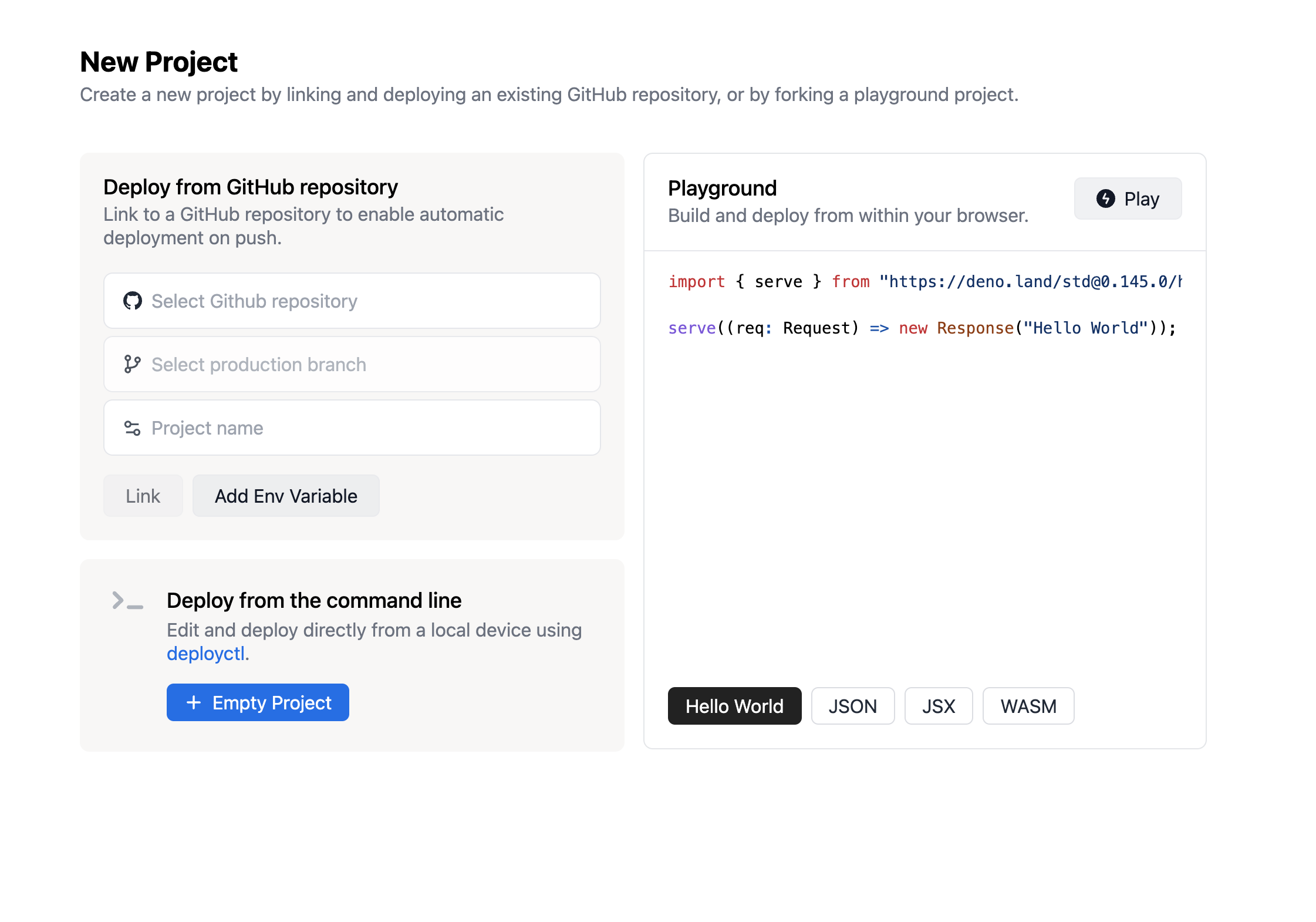 Select Hello World at the bottom of your screen and then Play. Deno Deploy will create a new application for you (ie afraid-bat-63), and your screen will be horizontally split into two panes:

Your code editor is located on the left side, and your execution environment is on the right.

Building a Web Server that Serves Data from a Database

The Deno Playground editor is a fully fledged IDE based on the Monaco Editor, which powers Visual Studio (VS) Code. This means that while you author your own code, you benefit from the features that VS Code offers, including auto-completion, quick fix, and code navigation.

Here, you'll create a small TypeScript web server that serves data from a small book database as JSON. By the end, the script will do the following: 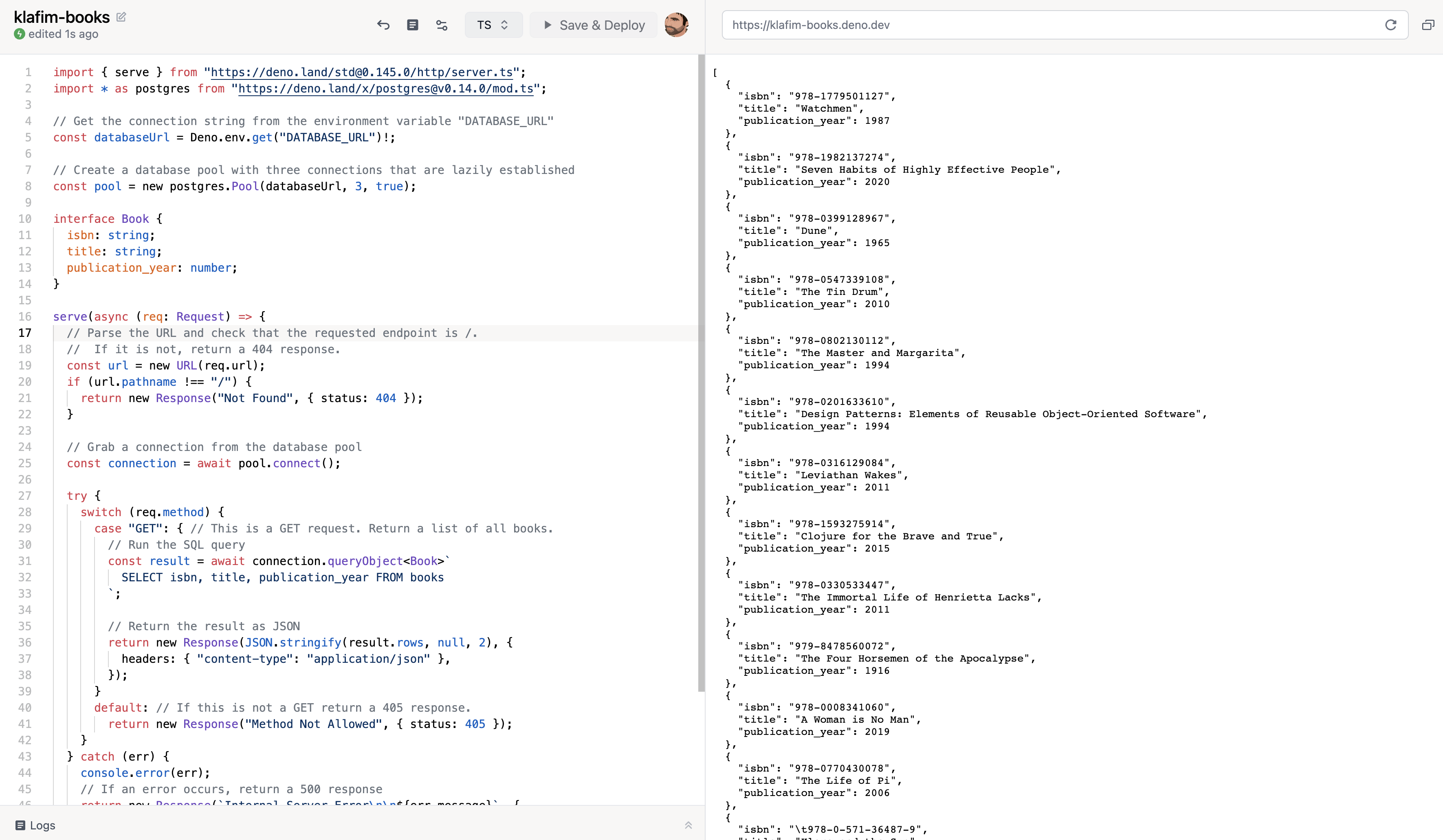 In the next few sections, you'll explore how this code can be built step-by-step.

In Deno, third-party libraries are imported as modules using the module URL inside the source code. Modules can be imported from any URL. For instance, you can import third-party modules that Deno hosts at https://deno.land/x.

Here are some rows from the books table: 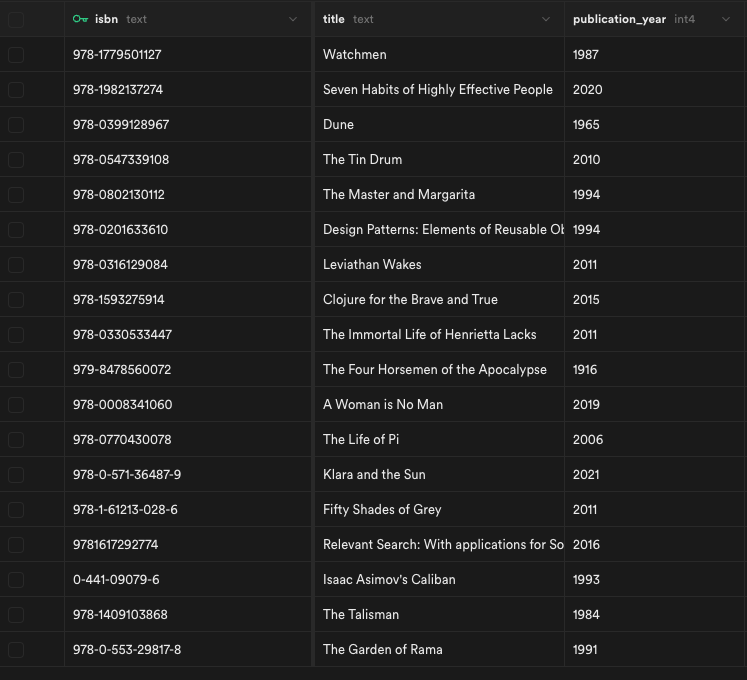 In order to store information in Supabase, you need to create your own database. To begin, create an account and start using the Supabase table editor UI to create rows: 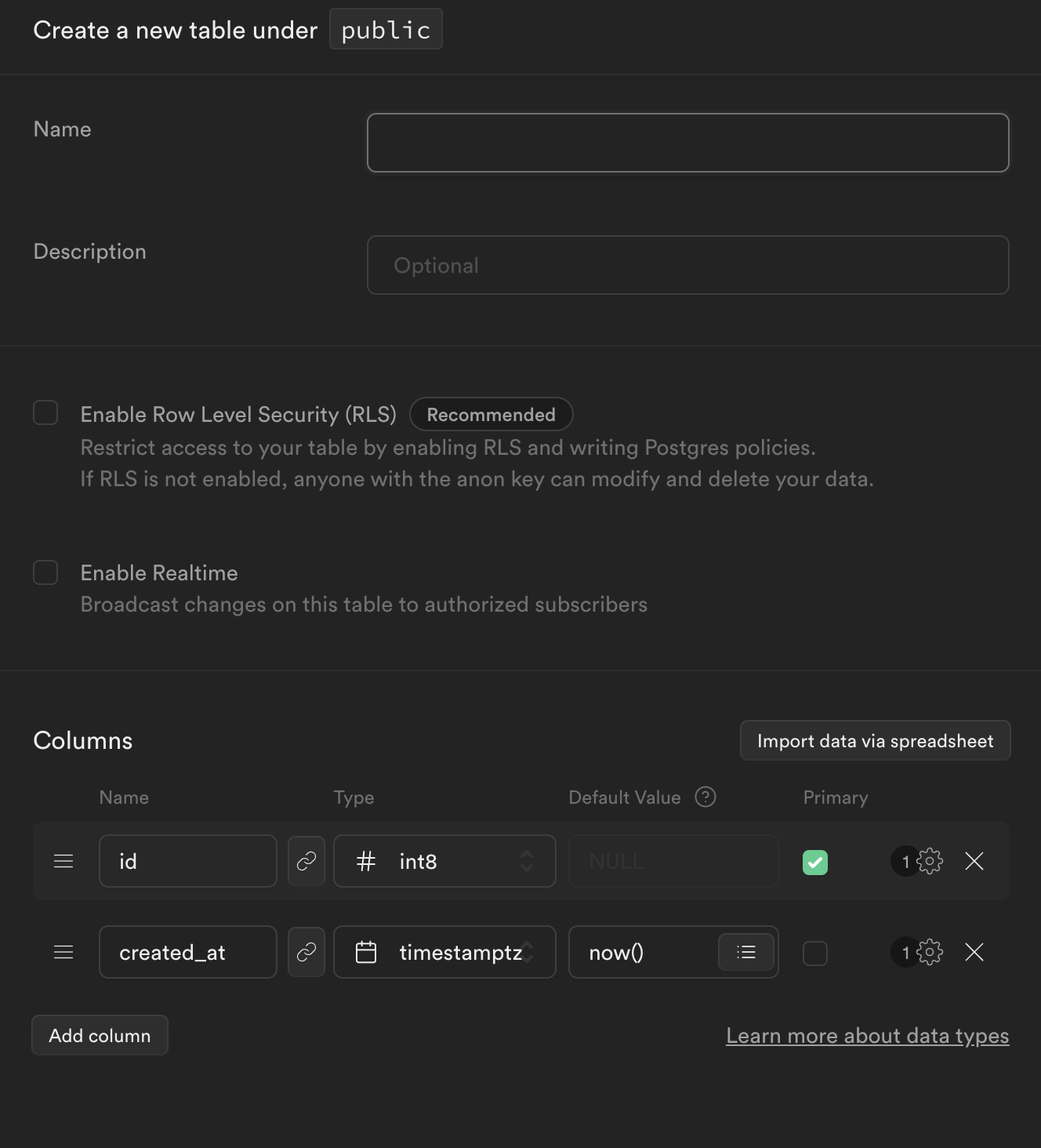 When a script runs on Deno Deploy, it can access environment variables via the deno-environment package that exposes a Deno.env object:

Please note: There is no need to explicitly import this package as it is automatically imported by Deno Deploy.

The question mark after the .get() call is here to let TypeScript know that the value is not null.

Connecting to the Database and Handling HTTP Requests

To connect to the database, you need to create a client via postgres.Client:

You can handle HTTP requests using the http_server Deno module, which provides a simple and lightweight HTTP server library. The module provides a serve function, a Request object, and a Response object.

To start implementing your server, you need to write the following code that calls a function getBooks() when the HTTP request is GET / or returns the appropriate error code:

To execute database queries, you can use deno-postgres, a lightweight PostgreSQL driver for Deno.

Then in the following code, you'll connect to the database and execute the query, and it returns the response as JSON:

If you want to quickly develop a proof of concept (POC), the Deno Playground is sufficient. But for production projects, you need a more robust solution that supports features like local development, version control, and rollback. This is where the Deno CLI comes in.

In this part of the tutorial, you'll learn how to install the Deno CLI, run a Deno script locally, create a GitHub repo with the code for the server, and connect a Deno project to that repository.

As previously stated, the Deno CLI lets you run a Deno project locally and manage the version of the code that's deployed.

Deno is a single binary executable that runs on macOS, Linux, and Windows. Depending on your OS, you can install Deno in a few ways.

Creating a GitHub Repo with the Code for the Server

Then you need to create a file called src/main.ts with the following content:

Before running your script, you need to set the DATABASE_URL environment variable. For example, you can set this variable to the URL of the database that you created in the section "Reading Environment Variables":

Then run your script with the following command:

By default, deno runs in a sandbox. To let a script communicate with the external world, you need to use the following command line flags:

When your code is deployed, Deno Deploy handles the permissions automatically. The command line flags are required only when you run your code locally.

Your server now listens to port 8000, and you can access the / endpoint by opening http://localhost:8000/ on your browser.

Connecting a Deno Project to a GitHub repository

To connect a Deno project with a GitHub repository, you need to access the new project page and fill in the details: 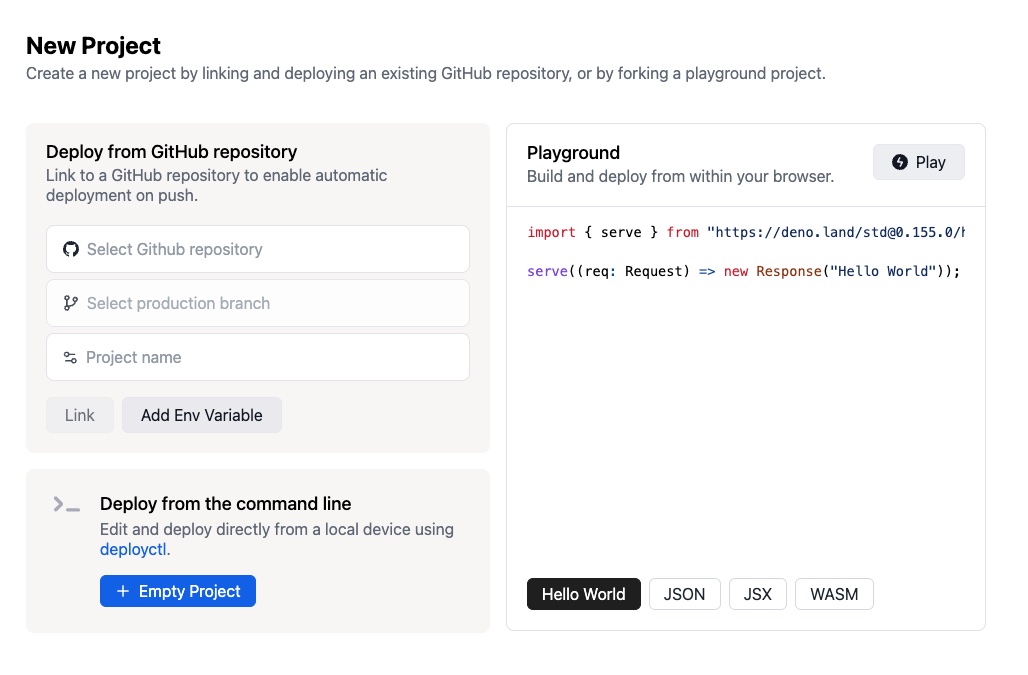 Once you push your code to GitHub, it's automatically deployed.

To check the deployment status of your code, visit the project page.

Here, you'll find an overview of the project, including the number of requests in the last twenty-four hours and the latest deployments: 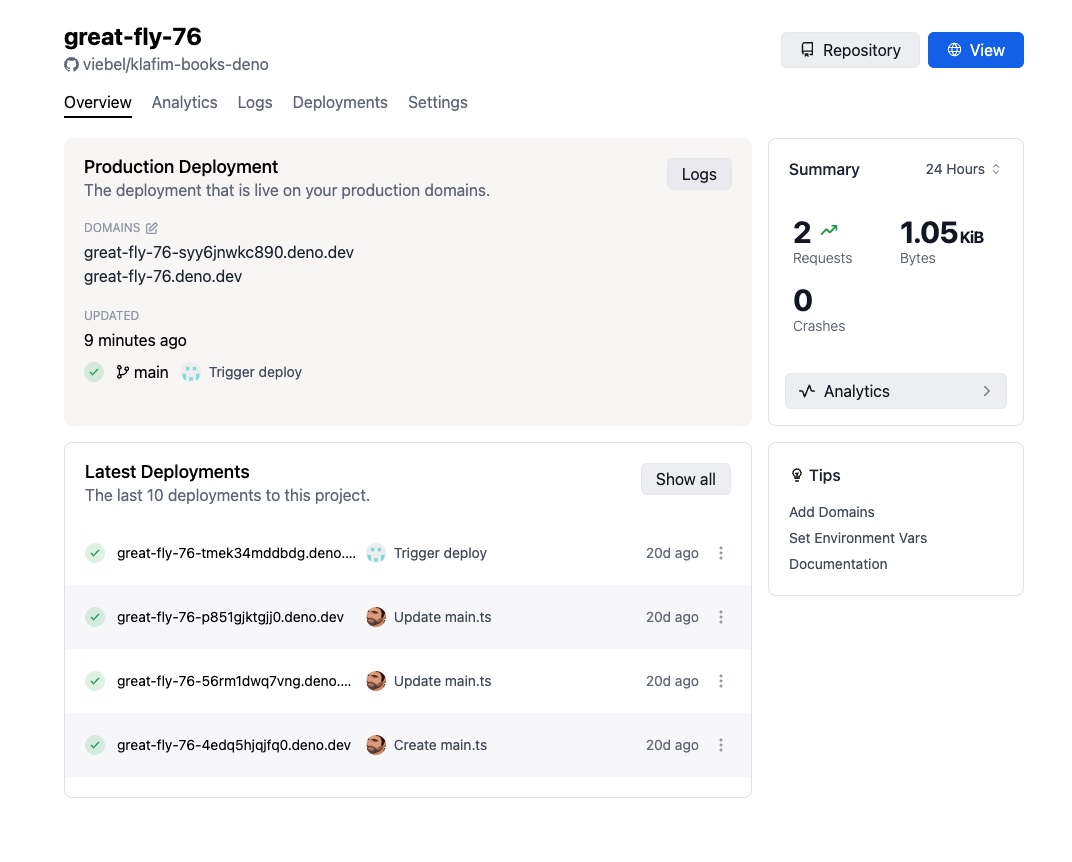 Rolling back to a previous version is straightforward. You just need to select the deployment that you want to roll back to and click Promote to Production:

In this article, you learned that Deno Deploy is fast and secure and has a fully featured web playground that can deploy simple scripts. For more complex projects, you learned how to use the Deno CLI to develop your code locally and deploy automatically via GitHub.

For projects that don't need to connect to third-party platforms, Deno Deploy provides all the necessary features that you need to deploy code efficiently. However, when it comes to connecting with third-party platforms like Slack, GitHub, or Salesforce, a significant amount of engineering effort and code is required. This is where a service like Fusebit, an API integration platform, can save you time. It handles all the boilerplate needed to integrate with APIs in a fast and secure manner.

Deno is adding native support for npm modules—this is huge news and gets us very excited! To celebrate this, we’re working on adding Deno support directly to Fusebit—this means your favorite integrations platform will include out-of-box compatibility with TypeScript, faster runtimes, and direct import of modules!

If this excites you, and you are considering Deno to power your application, join the waiting list to get early access to our beta release.

Build Your First App with Deno

Check out this get started guide for people new to deno and what they need to do to get up and running on their first deno-powered app.

Deno vs. Node.js — Five Major Differences You Should Consider

Highlight key differences between Deno and Node.js and what developers should consider when making a decision on them.

How Deno's Third-Party Module System Can Keep Your App Secure

Read this blog post and learn how the module system works and how it can benefit app developers with safe practices.